The biggest story ever told 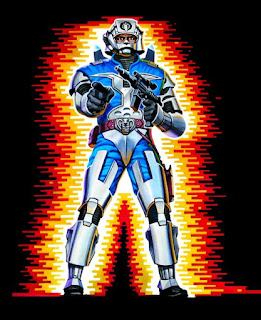 The toys were too expensive when I was a kid in the 1980s, that was the main problem. By the time they got to this part of the world, the costs had sky-rocketed. A single action figure might be a month's worth of pocket money, and forget about ever affording any of the vehicles or other accessories.

There wasn't even a guarantee that figures would show up at all - I never saw a stormtrooper or Darth Vader until I was 15, although there were plenty of bloody ewoks. So you had to make up your own story with the figures I got, and all the ones I had a a kid - usually Star Wars and GI Joe figures, 9.5cm tall, which was easily the best size for detail and playability - all got merged into a new story about an alternate world where World War 2 never ended, but built up over decades into an endless and huge war between two giant mega-states.

The Cobra Commander in battle armour figure became a lead fighter in the war, and the various GI Joes toys that also came in faceless armour made up his team, repurposed into new roles. Though not that much - the tech-viper figure (the only one I still have complete, even if his foot got slightly melted by a firecracker in the early 90s) was always the tech dude, and Snake-Eyes was always the stealthy ninja part of the squad. A Borg figure from Star Trek was... well, the Borg really, but there were some variations - ruggedly handsome characters like Hawk and Duke were standard bad guys, and an action figure of the queen from Aliens became an erudite genetic abomination who just wanted to be friends with everyone.

The story got bigger and bigger and bigger as I played with the characters in ways they were never intended. There was a long-running storyline involving a giant house - that always looked just like the house I was living in at the time - that had to be defended in the ultimate siege battle, and my home town got overtaken in a huge epic invasion story that got rehashed and retold a thousand times over - I still can't go past a particular sports field without recalling the concentration camp it got turned into in my head.

The story changed and mutated over years (at one point, ending the war and sending all the characters off into space on new missions), and there were odd retcons as figures got broken or lost or rebuilt, and replaced by new ones. The story was never linear, and went back over origins and noble deaths and everything in between again and again over a decade or so.

Then I became a teenager, and the action figures became one childish thing that faded away in favour of girls and music and booze and all that shit.

Sometimes I find the old toys, and I'm a 45-year-old playing around with his old men, and all that story comes back, and I'm there with those soldiers in that endless war again. That story isn't a huge concern in my life anymore, but it's still alive.
Posted by Bob Temuka at 7:33 PM