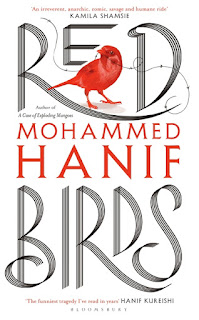 Any other novel, a jet fighter pilot who goes down in enemy territory, and is trapped in a small community deep in an incredibly hostile desert, and has to rely on friendly locals to keep him alive, would probably have that pilot be the main character of the story.

But in Mohammed Hanif's terrific Red Birds, that pilot is just a jerk, little more than comic relief, wearily tolerated by the people he had been dropping bombs on earlier. They're just trying to get through life with a minimum of high ordnance firepower falling on their heads, and trying to get a job at the mysterious bunker just outside their settlement. They don't care about the politics, they just need to put some food on the table.

Because the people who do cause this misery are buffoons, never questioning the decisions that leave them stranded in the desert, far from home, with nobody showing much interest in coming to get them. And they deserve all the disinterest they receive.

Instead, it's those people on the ground that really matter, trying to make a buck anyway they can, feeling guilty about lashing out at their dog, trying to move on from a life at barely sustenance level, and doing whatever it takes to get there. And if that means they have to throw a few scraps at some dumb pilot, that's what they'll do.