Isolation reading: A Horse Walks Into A Bar 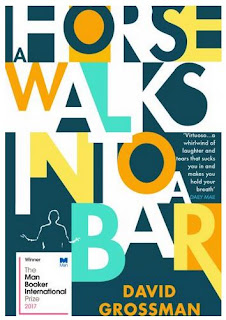 A Horse Walks Into A Bar
By David Grossman

A decent hook for a meaty short story is expanded out into novella length, and just about holds it all together, right until the end.

Dovaleh G, a scumbag stand-up, goes hard out on stage in a small Israeli town, and that's all that happens. His target is one particular member of the audience who he has a deep connection to, and the entire book chronicles the events on stage.

There are still plenty of flash-backs to get the reader out of the increasingly stuffy and increasingly deserted comedy club, (although it turns out there are more connections with audience members than is immediately obvious), and the setting is mean to have a stifling quality, trying to suffocate the reader beneath stale stage smoke and self-loathing.

It's a hook that is just clever enough to be irritating, but also really smashes into its high concept with relish. At the start of the story, Dovaleh comes across just as irritating and smug as you'd think, but as the layers are peeled away, there is a real human - who has suffered real pain - in there.

Some comedians claim stand-up routines are the best therapy in the world, but that kind of connection with your audience can be more than pure narcissism. And while it might be a long show to sit through, it's almost worth the sore butt.