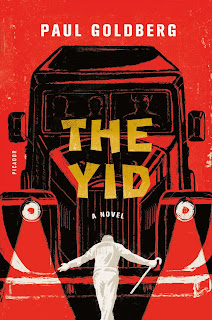 The Yid
By Paul Goldberg

The USSR had a shit of a time in World War II, and the people who came out the other side were tough as hell - survivors with the skills to survive in impossible situations. And when the secret police come knocking on actor Solomon Shimonovich Levinson's door as part of a Stalin-initiated pogrom against the Jewish people, they discover just how tough they can be.

Solomon's mission to stop Stalin and the despot's ultimate demise is a lot more theatrical than the grubby, petty death seen in the recent Death Of Stalin movie, but there is a real poetry in that theatricality, with a group of vengeful Jews making sure the dear leader goes out with a suitable ritual.

The crew who come together to plot the assassination are, at first appearances, a bunch of bickering old harmless Jews, but their arguments are sometimes centuries old, and their passion of righteousness runs just as deep and long.

It's a sideways look at a historical event, and while it's just a little too perfect to be realistic, it's a hell of a ride.