Indiana Jones and the foley of Doom 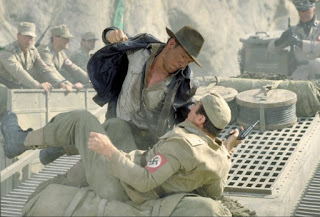 The Indiana Jones films had great punch-ups and epic car chases and outrageous whip action, and one of the things it did better than any other movie out there was the sound effects. From the very first film, the sound team - including the legendary Ben Burtt - did exceptional work with the soundscape that helped create the hyper-real world of evil nazis and awesomely powerful artifacts.

The punches sounded meaty and loaded, and the gunshots were thick and powerful. Combined with Harrison Ford's moans and grunts as he put his body through the wringer, it all sounded so much more alive and real than the cheap, tinny sounds of its action contemporaries.

The visuals through all three movies (we don't talk about the Last Crusade) are great and all, but the Indiana Jones films skated a thin line between preposterous action and realistic reactions, and the only way to make that totally immersive was to have sound crew give everything a bit of oomph, bang and boom. And lots of it.

We love Last Crusade - I know you mean Kingdom of the Crystal Skull ... urgh! The only things good about it are the fridge, and Ray Winstone, just.

Right, Connery as dad is wonderful.
You must mean the fourth movie?