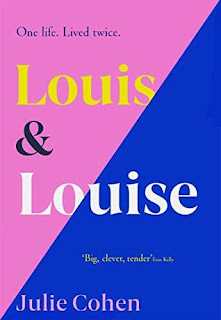 Louis and Louise
By Julie Cohen

Despite an appallingly ugly cover, this might be my favourite of all the novels I've read as part of my one-person book club, because it plays its premise absolutely straight, and gets real emotional resonance by leaving all the cleverness to the high concept, and just rolling with the punches.

It's a split narrative, where a baby in one storyline is born a mother's boy, and in the other is daddy's little girl, and this difference has huge repercussions - there are deaths and births and towns dying and living. Entirely different universes revolve around the fate of a sawmill, and the choices that Louise/Louis make or have thrust upon them.

Sometimes they do come together, and the main character will be sitting on the same beach at the same time with their family, and nothing is really different, but the paths they take diverge in some startling ways.

But Cohen takes the story head-on, and doesn't over-egg it, letting the obvious gender politics speak for themselves without making it into a huge, unwieldy metaphor.

And, crucially, one life isn't better than the other. A dear friend might be lost forever in one, but there's also a daughter that only exists in one version, and loving relationships that never appear in the other continuum.

It doesn't really matter if the baby is born a girl or a boy, except when of course it does, and Cohen's book takes it all as far as it needs to go.
Posted by Bob Temuka at 6:47 PM