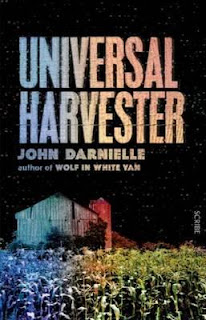 It looks obvious where Universal Harvester is going to go when the main character starts finding strange and bizarre things recorded on video tapes returned to the store he works at. It looks like it's going to be one of those stories where an innocent person stumbles across a snuff film, and is pulled into a world of extreme darkness and depravity.

But it's not like that at all. It goes somewhere deeper and far less predictable than that, and it ends up being a story about how people can disappear from your life, and leave pieces of themselves behind that you'll never get rid of.

There is still a weird cult, because there's always a weird cult, but the less you know about Darnielle's book the better. You only have to know that it's not what it looks like, because people aren't always what they look like.
Posted by Bob Temuka at 6:48 PM