Doctor who: Sorry about the maid 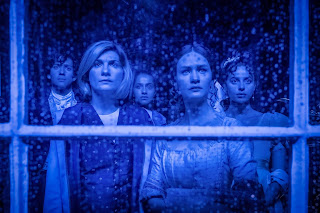 The new series of Doctor Who - the second with the excellent Jodie Whittiker in the lead role - has been a great improvement over her first. It's still weirdly clumsy and awfully blunt, but at least it's showing some of the ambition that was so sadly lacking in the first, especially with Jo Martin's gloriously impossible Doctor turning up.

But that storytelling clumsiness is still a big issue - the Doctor's turning away from Graham when he talked about his deepest fears was bizarre, and they way she is just constantly giving up seems like it really needs to pay off somehow.

And last week's story - where the TARDIS crew hang out with the Shelleys and Lord Byron on the weekend Mary had the idea for Frankenstein - really hit a sour note with its casual approach to death. Doctor Who has always been saturated in carnage, and the overacting deaths have long been a feature of the show, full of crazy screaming and writhing. And 'The Haunting of Villa Diodati' is no exception, with several poor serving staff meeting a gruesome fate at the hands of a renegade Cyberman.

So far, so Doctor Who, but then it goes on to say that some lives are more important than others, and that a poet's life is worth more than the working class stiffs who serve them, and that really grated. While the idea that 'words matter' is a strong one, they still don't matter as much as an innocent human life, and the victims are just as worthy of saving as somebody who was a famous writer.

Never mind that it overlooks that maybe the serving staff has subtle ways of influencing hat happened to the Great People around them, which may be lost - who's to say Mary Shelley wasn't affected by the loss of her nanny to put her off writing anything else - but the idea that their lives aren't as important as a poet's, that their experiences have no value, is just cold.

There was a recent case in our local justice system, where a drunk driver got off without a conviction because he wrote a song about the experience, and I had a similar reaction to that. It doesn't matter how good your song, or your poetry, or your paintings are, you shouldn't get preferential treatment in the justice system because of it.

And just because you're not one of the priveleged few whose art will be remembered in years to come, it doesn't mean you're not worth saving. The Doctor should know that, better than anybody.
Posted by Bob Temuka at 7:48 PM