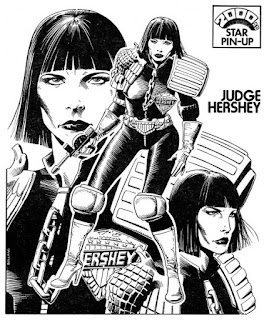 Spoilers for the absolutely bloody excellent Judge Dredd: Guatemala, by John Wagner and Colin MacNeil, which ran in 2000ad progs 2150-2157...

The Chief Judge is dead, but her daughters survive.

John Wagner is the best comic writer in the business. Decades after he started producing a vast amount of comic scripts, when many of his peers and contemporaries have become stale or irrelevant or just too fucking weird, he is still writing some astonishing comics. Even with a rock-solid group of writers to fill the daily grind of Dredd's world and take it to new places, his occasional Dredd stories are still the very best Dredd stories.

His style for Dredd is so stripped back and efficient, so it's never too overwrought and that just makes the stolid, no-bullshit emotional beats hit even harder. And even as Wagner acknowledges that nobody lasts forever and kills off long-running characters with brutal finality, he also keeps introducing new layers, just like real life does.

Guatemala - his most recent Dredd comic - continues themes on the replacement of humans with robots, themes he has been building up for decades. It begins with the end for one of the biggest supporting characters in the comic, an ending that is so dignified and restrained, it hits so much harder than another death for Batman's butler.

But it's also a story that ends with life winning, in a city where human life means nothing to the robotic despot in charge, and the late Judge Hershey's legacy lives on, in the most unexpected ways.

And when the robot overlords treat human life as nothing more than valuable spare parts they can sell off, Judge Dredd - who has killed more people than anyone else on the planet - is still on their side, and it's genuinely thrilling when the genocidal robots are righteously taken down by the solid fist of Mega-City One.

And while Judge Hershey is gone, two new versions of the character endure. Her previously unknown daughter and granddaughter, created through the young Hershey's act of secret kindness, carry on. They're tough as nails and have been through some shit - a grandson didn't survive the storyline - but they have been saved from a terrible fate, thanks to the dying wishes of the best Chief Judge ever. Life wins.
Posted by Bob Temuka at 5:59 PM