Legion of Super-Heroes: I have no idea what is going on (and I love it) 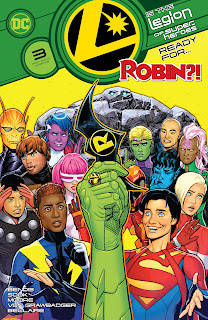 Even though I am frequently lost when reading modern superhero comics, because they're all tying into some big mega-arc that I don't give a shit about, I like my Legion of Super Hero comics to be confusing as hell. Which is working out well, because there is a lot about the current comic that is confusing as hell.

I've read a few reviews by Legion fans of the new book by Brian Bendis and Ryan Sook who are totally lost by the first few issues, and I can't blame them. A lot of characters appear without a proper introduction, often looking completely different from earlier versions of the character, and there are no allowances for the audience to catch up, because the banter is more important.

I sprocking love it, especially with Sook's slick, rounded and colourful artwork. I love that complexity of a massive cast, where everybody gets a line or two, but there is no room for everybody to get some big emotional moment. Every other comic is full of that kind of shallow characterisation, it's genuinely interesting to have one where that isn't a huge concern. You just have to go with it.

I wasn't a fan of the most recent version of the Legion before the current one, which was a continuation of the same team that premiered in the 1950s, but was determined not to do anything really new with them. The new Bendis/Sook series is going in directions I can't predict, and that's fine by me.

So it's not surprising to me that I'm digging it so much, because the Five Years Later Legion is one of my favourite versions, and it literally took me decades to work out what the heck was going on there. I can't wait to see where Bendis is going with the new incarnation, once he's displaying more than a snarky line or two. It probably won't go anywhere, because a lot of Bendis' team comics ever do, but this journey into the 31st century is good enough, that I don't care about the destination. I just have to go with it.
Posted by Bob Temuka at 7:39 PM