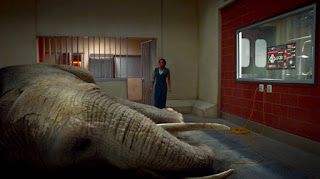 I think I generally liked the new Watchmen for the same reasons every else liked it (unless they weren't watching it because they didn't want to be scabs, which I can understand) - because it featured some superb acting and an excellent score; and because sometimes it was gloriously bugfuck weird and sometimes achingly human; and because the entire Hooded Justice thing did what good retcons are supposed to do, and added an additional layer of depth to the original work without eating away at that original work.

But I really, really liked it because it was one of those shows where the lovely wife and I would start watching an episode, and I'd say something like 'well, Doctor Manhattan is really the elephant in the room in this whole series' before he showed up, and then that episode starts with a picture of an elephant, and then later in the episode there is an actual elephant lying in a room.

That kind of synchronicity is priceless.
Posted by Bob Temuka at 7:28 PM