Prometha gives me the end of the world shits 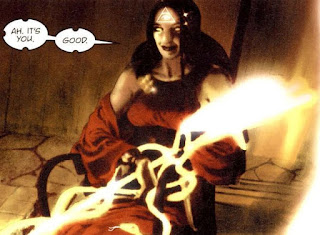 Never mind eating cheese before going to bed to avoid the most fucked-up dreams, it's the Promethea that did me in.

I scorched through almost all of Alan Moore's ABC comics recently, mainly as a comic to read while a new human was sleeping on my chest. But after getting through all the Tom Strong and Top 10 and Tomorrow Stories in record time, I got stuck on the Prometha comics. Not because they were a slog to get through or anything - although the journey through the afterlife that fills the middle third of the comic definitely dragged on too long - and not because they were full of complicated ideas that were difficult to get my sleep-deprived head around, but because they were giving me the weirdest fucking nightmares about the end of the world.

Some of them were absolutely terrifying, with aliens announcing that they were going to shoot the planet with a death ray, and leaving us all waiting around for the inevitable carnage; and some of them were relatively sedate, with the world outside the kitchen window fading slowly away. Some of them was just fucking weird, with the world getting overlaid with swimming pools filled with magic idea stuff and dragons that looked like miniature dogs, while endless variations of dead loved ones came back to give me advice about my career and how to deal with oblivion and those fucking swimming pools. And then there was the one where a trailer for a new Need For Speed movie turned into another apocalyptic vision of all the people in the world getting swept by by an invisible force of acceleration and drowned in the ocean.

Even though Prometha's apocalypse was a lot more benign than this - the end of the world just means we all move into a new one - I gave the comic a rest after that, and the dreams have died down a bit (they never really go away), and I'll come back and finish it off soon enough. But I might take a bit slower this time, and I'll probably be reading them in the morning instead.
Posted by Bob Temuka at 6:14 PM