I really am so fucking dumb: Q the music 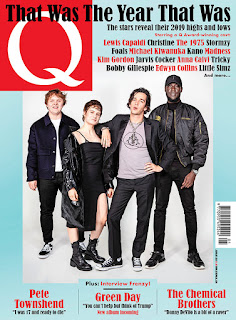 I've read almost every single issue of Q Magazine since the early nineties, and it still remains one of my primary sources of articles and reviews and news about new music, even if nobody ever needs another cover story about the Gallagher brothers for as long as humanity endures (and even if they seem to be going out of their way to make their cover subjects look as dorky as possible. I mean, look at that cover above! Lewis Capaldi has made a fuck-tonne of money with his image of total nerdiness, but how the fuck do you make Stormzy look like a giant geek?)

So that means it's only taken me nearly 30 years to realise what the magazines title actually means, and that's a shit pun on the phrase 'cue the music'. I literally never gave the title any thought, and thought it was just called Q to look cool.

I'm just so fucking stupid, how have I not died yet?
Posted by Bob Temuka at 4:58 PM