New Scream! at the store 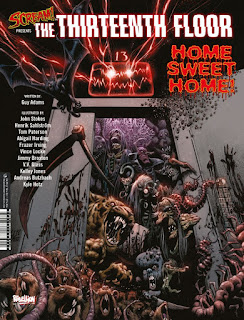 Scream! - the horror version of 2000ad - only lasted for 15 glorious weeks back in 1984, but I was at absolutely the right age to fall totally in love with the comic, and that short run has always been one of my favourite publicationss ever. There haven't been many other comic buying experiences that were as thrilling as finding a new Scream comic at the local dairy.

And all these years later, it's still possible to drop into the local newsagents and find an unexpected new issue on the shelves, and that makes me happier than Ghastly McNasty getting a facial.

Rebellion has been publishing a bunch of different specials over the past couple of years, raiding the IPC vaults and dusting off some of the intellectual property they find in there. There have been a couple of 'Scream and Misty' specials which included the reboot of the classic 'The 13th Floor' strip, where Max the building computer drops miscreants off on a 13th Floor that doesn't exist and blows their fucking minds out, covering it all up with the aid of hypnotised tenants. While it lacked the original grimy beauty of Jose Ortiz's work, the new stories did have some trippy Frazer Irving freak-outs, which is always welcome.

That revived strip has now carried on into its own special issue, and that's what I found on the shelves last week. The new story - written by Guy Adams, who has been doing some fairly interesting stuff for 2000ad recently - doesn't have quite the same impact as the doses of comic horror did when I was 9-years-old, but what could?

There are more artists in the longer story, and some of them clash painfully with each other, but that's kind of the point when Max is giving everybody their own individual vision of hell. And Adams takes the concept out of the tower block to smash it into the world outside the front doors, so this is no ending for Max and his social justice experiments.

It might be another 30+ years before there are more Scream comics, but that's okay. Now I just gotta keep an eye out for the new Action special...
Posted by Bob Temuka at 7:30 PM