Shambling through the philosophy on the Walking Dead 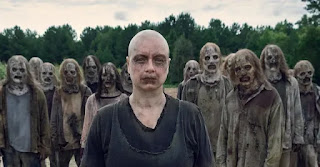 The Walking Dead was always at its strongest - in both comic and TV show - when it dealt with the desperate logistics of surviving a world where the dead were getting up and killing the survivors.

But when it becomes a story about what philosophy and ethos is best for a post-zombie society, it starts to fall apart faster than a rotting corpse in the sun, because the philosophies it puts forward are always so fucking stupid, and usually some variation on 'might makes right, and you have to be cruel to survive', and never really anything else.

It's almost enough to make you wish George Romero had never stumbled into the idea that zombies could be a metaphor for anything, and giving zombies that extra shallow level of complexity, when it always leads to this awful and shallow philosophising.
Posted by Bob Temuka at 5:28 PM