Videos with your fuel 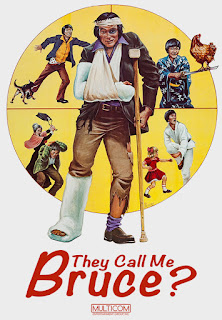 When we got our first video player in 1984, there weren't any video stores in town, which wasn't that surprising because it was a town of 3000 people. The golden age of the video - long since faded - was still to come, and even that small town would have a couple of dedicated stores, but for the first few years, most of the movies I saw came from the same place that sold us our petrol.

There were three service stations in town that also offered video tapes, and it was through them that I first saw the Terminator, (after failing to sneak into the film as a 10-year-old), and my very first Sergio Leone, and the immortal They Call Me Bruce? and absolutely everything starring Stallone and Van Damme. It was where I stared at the back cover of the Dawn of the Dead cassette, too freaked out by the horror on the packaging, and where I would get Return of the Jedi out again and again if nobody told me specifically not to.

Those petrol stations had everything you need for a good night out for a 10-year-old - videos, chocolate and lots and lots of soft drink. They would even hire out a primitive 1980s video game console, which featured 200 games, and at least a solid six or seven were actually worth playing. It was everything you could want, if you could scrape a few bucks together.

The videos soon moved out of the service stations and into the stores, and then the stores faded away over the years to become functionally extinct now. The only ways to hire out physical movies in town are the redbox vending machines, which offer a couple of dozen new films to rent.

And some of those redboxes are showing up at the local service station, which feels fitting. Even all these years later, I still associate movies with the smell of petrol and rubber, because that's where you went to get them.
Posted by Bob Temuka at 7:14 PM