Comics in the mail 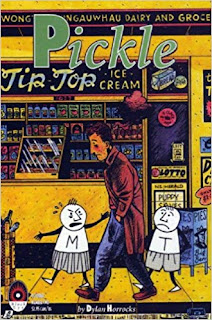 In 40+ years of comic buying, and 20+ years of a raging internet, I've rarely bought my comics online. It just always felt so easy, like it was cheating somehow, because how can you appreciate something that took no effort to get? Besides, I also always wanted to support my local stores, because no ease or convenience matches the fun of interacting with actual people.

But in a desperate bid to complete some comic runs that I've been after for years - and in some cases, decades - about once a year I do a small buy of a dozen or so comics from an online retailer based in the States, and get them shipped over.

This year's lot arrived last week, and it was so satisfying to fill the inevitable holes in the collection. After years of stumbling across random issues here and there, I was able to get the last few issues of Dylan Horrock's Pickle, (although I'm still missing the 'lost' issue he finally published last year); and Peter Milligan's Hellblazer comics (the last John Constantine comics ever published, as far as I care);  and the early Cerebus comics I've been after since forever (giving up on the second half of that 300-issue run was a great decision); even that one issue of the Superman: Panic in the Sky comic that had been a hole in that storyline since 1992 (I have no excuse for this, other than I freakin' love that story); and the last two BPRD comics I needed and one of the three Hellboy comics I'm trying to find (I should've just waited for the omnibi); and an issue of the Wagner/Grant/Kennedy Outcasts comics from the late eighties (an entire series I have never seen anywhere in real life).

Getting them in the mail is cool, and while it's still not quite as satisfying as finding them in the local shop, closing off the search for those specific runs - when I live in a country where back issues are very, very hard to find - felt pretty damn good.

And there is always more - there are always a few issues of Shade The Chnaging Man or DC Comics Presents I'm after, and I still cannot, for the life of me, find that one issue of the last Mage series from Matt Wagner. Seriously, #4 isn't anywhere. Maybe it'll show up when I do next year's lot.
Posted by Bob Temuka at 7:03 PM