Why Meg was the best part of the White Stripes 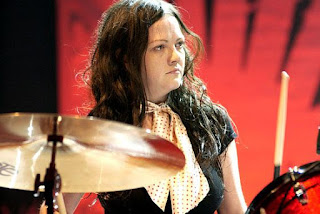 Jack White hasn't stayed out of the spotlight much since the White Stripes first blew up two decades ago. After the end of the band, he has produced a whole lot more music, both on his own and with his mates, and a lot of it has been bloody good.

We don't hear so much about Meg these days, except in innumerable 'where is she now' bullshit articles. But it should be never be forgotten that she was an incredibly vital part of the band's success, offering a solid, thumping counterpart to Jack's flights of guitar fancy, and that was essential to the success of the duo.

Meg White was not a technically proficient drummer. She was no Bonham, or Moon, or even a Ringo, but she was as essential to the White Stripes as any of them were to their bands. That plodding thud might not have been perfect, but it could thud forever. It wasn't just an important counterbalance to Jake losing his goddamned mind on nearly every song, it was an indispensable part of the band's charm, that DIY punk aesthetic. It didn't have to be good, it just had to be alive.

The choice to step away from the drumkit, at least in public, is definitely Meg's choice to make, but it's so easy to miss her contribution to that sound, and wish there was more of it.
Posted by Bob Temuka at 6:29 PM