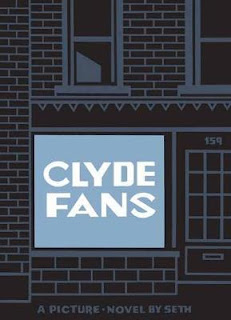 Clyde Fans is a monumental piece of comics, with Canadian cartoonist Seth literally taking decades to produce the story. It's as thoughtful and emotional and funny and beautiful as anything else the artist has done in his long career. His line is as thick and certain as ever, and his stories have a quiet dignity that can be totally addictive.

But after reading the entire collected book recently, I'm still getting my head around the whole thing, and it's because I've been consistently misunderstanding the point of the whole comic for years now.

While it has taken a long time to create, the comic has been coming out on a fairly regular basis, with chapters unveiled in issues of his Palookaville comic, and in collections of the first chapters. And it has been, to be honest, pretty fucking miserable. The imagined lives of the main characters have seemed wasteful and dull, and there didn't seem to be much of a point beyond the mundane meandering.

But then, in that final section, it becomes something else entirely. Simon's wasted trip, where his social anxieties chronically undermine his ambition to be a salesman as good as his brother, has a transcendent climax that casts the rest of a book in a new light, something larger and more human than anything suggested by the dusty offices and thoughtlessly rude comments that fill the earlier chapters.

There are certainly arguments to be made that Seth is finding justification in stagnation, that he is finding a moral purity in a nostalgia that can overtake your life, that it's okay to hide away from the world in your dark room.

And yet, it's also much wider than that perspective, showing that even the lives of people who are only remembered in yellowing sales slips and pictures on the wall of an abandoned shop have hidden depths. This monumental work is heartfelt and alive, even if it has taken years to get to the point.
Posted by Bob Temuka at 7:13 PM