Fumetti freaks me out 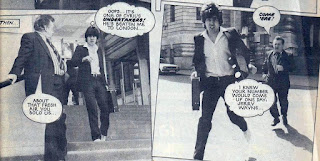 The fumetti format has never really caught on in English language comic books, but there have been a few efforts over the years, and when they do, I just can't get into them, because they always strike me as deeply creepy.

They can also be inadvertently hilarious, as the models involved contort themselves into unnatural positions and have their features frozen in painfully unnatural expressions. Photos also bring more realism to deeply unrealistic stories and plots and characters, highlighting the absurdity of it.

But they also feel like stolen moments in time, already lost by the time they get to some kind of publication, and all that unnaturalness can give proceedings a disturbing air.

Maybe it's also because you can see the faces of the people, they're not just something born of pure imagination, brought up by a few lines of an artist's pen. These are actual people with actual lives, frozen into the silence of the comic strip.

The format already suffers from huge limitations, you can do anything with a pen and paper, while setting up the shot of a prefect panel of fumetti might require a huge amount of work. Digital manipulation means it's a lot easier - British artist Clint Langley's style has evolved into a weird digi-fumetti, with faces of real people surprisingly seamlessly plonked on bonkers fantasy - but fumetti still looks weird and sinister to me, and no way to do great comics.
Posted by Bob Temuka at 5:41 PM