Doctor Who and the curious lack of ambition 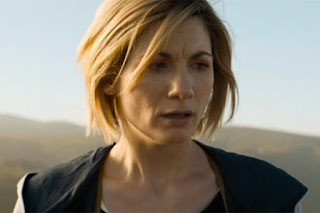 My favourite Doctor is always the current Doctor, but I still think Jodie Whittaker is objectively bloody fantastic in the lead role, backed up by a truly classic crew of companions. The new series looked beautiful, and blunt political allegory is always better than no political allegory at all. And yet, even with its admirable stab at representation and diversification, the latest series still felt massively underwhelming, because there didn't seem to be any ambition beyond a 'back to basics' approach.

For a shitty British kids TV show, Doctor Who has always had huge ambitions, and that's certainly been the case in the Doctor's 21st century adventures so far. Russell T Davies was going for Spielberg on a BBC budget (with a dash of kitchen sink melodrama), while Steven Moffat was trying to make something Kubrick would be proud of, while still offering gross and funny monsters for the young ones.

But there wasn't much of that in the new series. There were intriguing hints of something deeper and darker going on, but they never went anywhere,with more of a focus on individual adventures with relatively minor stakes. But this kind of thinking, trying to recover something that once was, is always so limited and stifling. Attempts to make it like it used to be are always doomed to mediocrity, and something new and ballsy and crazy is always better, even if it never pays off.

I'm never going to be in charge of Doctor Who, but if I was, I'd go all in - like many, many dorks, I have a huge and convoluted story I'd like to tell if I had that chance, and it's a little painful to see the show now run by people who don't have much more than 'The TARDIS crew go to an alien planet' or 'They go back in time and discover that prejudice is bad'.

My one is that there were versions of the Doctor before William Hartnell, but they weren't the Doctor, because he hadn't found out what he was yet. One regeneration might be the Lawyer, and the next might be the Writer, or the Architect, or the Diplomat, and it would only be at the end of the 12th life that the cycle started all over again, with the character now established as the Doctor, and he would lose the memories of all his previous lives, so Billy Hartnell would still always be the First Doctor, but there would be a universe of storytelling opportunities opening up beyond that, and it would explain what Tom Baker was up to in the Day of the Doctor, while also explaining for once and all what those previous faces seen in the Brain of Morbius were and oh shit, I've just bored everyone to death....

Probably just as well I'll never be in charge in Doctor Who. But I hope they reach for something new when the show inevitably returns. The Doctor herself wouldn't settle for anything less.