My one big idea for the DC Multiverse 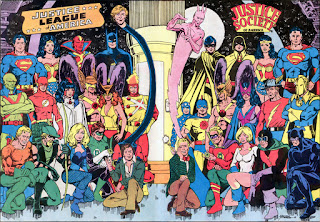 I would always rather have something that tries to be crazily ambitious and fails, than anything that plays it safe and uses the excuse of taking things 'back to basics'. This particularly applies to Doctor Who, and after the last series showed a crippling lack of ambition, I fan-wanked all over the place a few months back with my idea of the unknown history of the main character from before he was William Hartnell, and his other roles before he took on the title of The Doctor.

But it also applies to the big, dumb superhero comics that I can never really get over, and with so much opportunity that the DC multiverse offers, it's always a bit disappointing when the biggest idea seems to be turning Batman into the Joker.

The dark multiverse shenanigans of the past couple of years might feel edgy and groundbreaking for some, but surely the people creating these things actually want to do something new and different. Don't they?

Shit, if I had my way - and I can happily share this nonsense here because there is no way in hell I'll ever have my way - I'd be making the DC multiverse a lot more metaphysical, and have the different universes housing the souls of the same characters, with their spiritual essence traveling between universes at the point of death, so that the Bruce Wayne of Earth-2 isn't just the same person as Earth-1 Bruce physically, they're the same person spiritually, and the afterlife that has been well established in many, many DC comics is a way-station on the soul's journey, before the souls head on to the next universe, in an endlessly self-perpetuating cycle of rebirth and renewal, so you could create an endless rebooting, and it's always the same person, even if they can't remember their past lives, and  the time differences would all be a bit Jeremy Berimy, but that's easy to fix with an exposition box or two, and we can have endless Bruce Waynes, always updating for a new generation, never bogged down by years of bullshit, while also hinting at the actual meaning of life, at least in a fictional universe, and oh shit, I've just bored everyone to death again....
Posted by Bob Temuka at 5:17 PM