Would've got X if it was only X 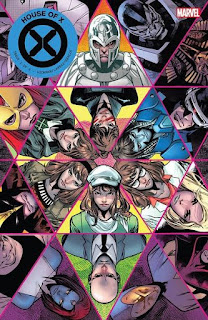 As somebody whose love of all things X is deep and true, I was interested in the new X-Men direction, because it actually looked like something genuinely new, and even though Johnathan Hickman's other comics have left me cold, the ideas and execution behind this new direction definitely looked interesting.

And all that interest shriveled up and died the moment they announced they would be following up the first mini-series with six new series, and I never bothered with any of it.

If there had been just one X-comic - even if it came out weekly with a stable creative team - I would have been more interested in picking it up, but I just couldn't be bothered with endless other titles by creators that I never gave a damn about. Some of them sounded interesting enough at first glance, but Marvel couldn't stop themselves from squeezing every possible cent they could, and it was all such a fucking overload that it was easier to just not bother in the first place.

Maybe those editors in the 1980s who fretted about diluting the X-brand with The New Mutants actually knew what they were talking about. Maybe just one story in one comic (okay, you could probably still get away with a Wolverine comic on the side) is actually all you need, not a whole new line of things.

It's an idea that is still as relevant now as it was more than 30 years ago, but Marvel's fear that it might be leaving money on the table by not saturating the market means they're getting less money in the first place. There's no evolution here.
Posted by Bob Temuka at 5:02 PM