There is some worth in old Wizards 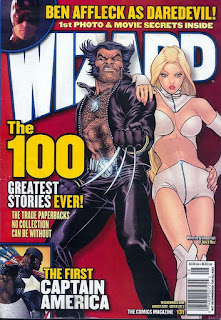 Wizard was often an appalling magazine about comic books, full of sexist, frat boy humour that has aged incredibly badly in 2019, while the price guide mentality it fed off ultimately ate itself up (even if it never seems to really go away).

But I still bought a small pile of them for ridiculously cheap recently, and behind the dumb jokes and mediocre puff pieces, they do capture a time that is lost now, full of breathless articles about comics that I've forgotten even exist anymore, including crossovers that were rarely reprinted, and endless Authority spin-offs.

Especially because the magazines I was reading were all from the early 2000s, and all these things were heavily covered in the internet of the day, but have now been wiped from the digital record, and can only be found with some serious digging through the wayback machine.

I bought this latest batch of Wizards with the intention of getting rid of them straight away, but they're such weird documents of a weird time in comics, and one that is already largely forgotten, that maybe I'll hold onto them for a while.

Plus, they're fucking excellent for propping up the baby's cot, so they aren't going anywhere.
Posted by Bob Temuka at 7:12 PM