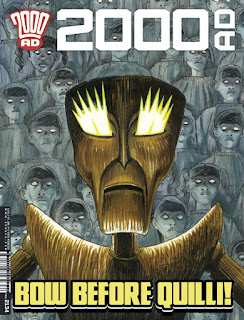 2000ad may have a gaming company behind it, but has never had deep pockets, and combined with a general reluctance to give the creators too much of the rights, it's always going to be losing its best talent. This has been happening for years, with brilliant writers and artists disappearing into TV or video game work, or hashing out quick novels. and novels. Thirty years after the first generation of 2000ad creators were gleefully snapped up by the industry's bigger, richer US cousins, the weekly prog is still a talent farm for them, with the likes of Al Ewing finding mega-success at the house of Stan and Jack.

Fortunately, 2000ad has always had a clear path for new writers and artists, with a submission policy built on proving yourself with a few Future Shocks, before getting a crack at a serial. It's a policy that has seem several new generations of creators find their voice, and produce some fantastic comics.

Some of the creators have quickly made the smooth transition to things like Dredd, and a lot of the new breed can quickly make a name for themselves.

But it's hard to pick the next stars, just from a four-page short. There usually aren't any individual stand-outs at this level. While you can certainly tell when somebody isn't going to make it, it can take a while to go from 'new face in the credit box' to 'oh shit, I have to check that person's work out right now'.

And even the best creators can start out shaky. A lot of the Future Shocks can feel not quite there, and half-formed, or just dramatically dull. There isn't a lot you can really do with a four-page story - which is why there have been more three-part done-in-ones in recent years - and sometimes all you can hope for is a decent punchline and some nice art (the ones that work best are when a newbie is paired with an old hand, as an art robot who has produced a mass of work over the years can paper over the cracks).

But they still have an important place in the prog, after four decades of shocks. With a pleasing eye on some much needed diversity - 2000ad has more female creators producing regular comics than any other time in its history, and this year's all-ages issue showed a drive to get some readers outside the usual aging demographic - the future remains bright.
Posted by Bob Temuka at 7:45 PM