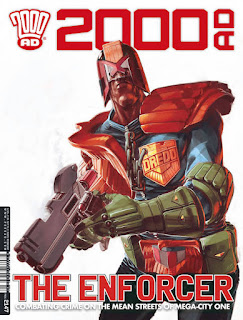 Judge Dredd won't live forever, but he's not dead yet. A rotating roster of different Dredd writers have all produced terrific work this year, adding to the saga of Mega-City One in clever, surprising and bloody funny ways. Some of them are building up their own cast of characters they return to, some of them have dug into the long history of the story, and some just have a killer punchline.

But there are two writers whose Dredd stories are clearly a cut above the rest. Rob Williams has written a brilliant run of Dreddworld tales in the past few years, and in recent months, he's been dealing with the fallout from the brilliant The Small House story, and wrapped up the Judge Pin story with typical style, although the undisputed brilliance of Chris Weston's art was certainly a factor.

But John Wagner's Judge Dredd is still the definitive Judge Dredd. He's not as prolific as he once was, but Machine Law and the current Guatemala storyline have both been incredible, with understated storytelling and remarkable pacing. The way Wagner makes it look so effortless cement his place as one of the best in the business - the opening of Guatemala is an aching gut punch in one page, and he's still chasing up themes he first started exploring in Mechanismo a quarter century ago (or even, arguably, ever since Robot Wars in the late '70s).

Judge Dredd just isn't the same with no Carlos Ezquerra art, and never will be again, but it's still the shining light in the 2000ad line-up. Dredd lives!