Prodigy: Considerably smarter than you 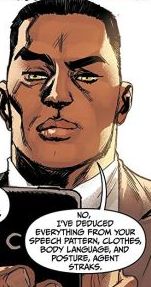 You can always spot the smartest person in the room in a Mark Millar comic - they're the one telling everyone else that they are, in the most smug and patronizing way possible. They're also the one always calling every other character an idiot or a moron, in a storytelling tic that is almost as overused as Millar's 'what are you talking about'?

Unfortunately, anyone with even the slightest bit of intelligence knows that anybody who is consistently bragging about how smart they are always looks like an idiot doing so, (a lesson a few prominent politicians in this world are too fucking thick to learn).

This kind of false smarts is everywhere in Millar's comics, and none more so than Prodigy, a comic whose entire premise is that the world's smartest man uses that intelligence to save the world. Unfortunately, he's only smart in the sense that he seems to have read the script before the comic has started, and can make huge leaps of logic based on plot dramatics. He's also not even smart enough to save the world from an invasion from a parallel dimension without blindly murdering billions of people, which is pretty fucking dumb.

I still like Millar's comics a lot, because they're short and punchy and can be so mean they're hilarious, and he gives artists some terrific action to get stuck into - Rafael Albuquerque gets to draw action in Prodigy that is light-years away from his moody and gloomy scratching in American Vampire, and his art is wide and open and free.

But smart people don't need to keep telling you how smart they are. Anyone with half a brain knows that.
Posted by Bob Temuka at 6:28 PM