Green Lantern: To nowhere and back again 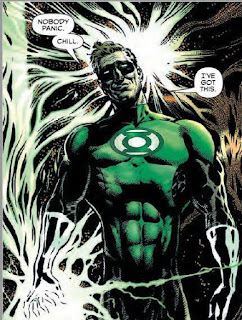 If somebody told me 20 years ago - when I was deep in my Grant Morrison fanboy love, and absolutely convinced the Invisibles was the greatest comic ever - that the main output from the writer in the far-off future of 2019 would be a fairly average TV show about a hitman with an imaginary unicorn; a comic book about Santa Claus; and Green Lantern comics that still feel like every other Green Lantern comic, I would probably be a bit disappointed, and not only because the time and date for the Supercontext came and went seven fucking years ago.

The new Green Lantern comic has still been leaning into the big, heavy mythos that have overwhelmed the dude-with-a-magic-ring story for ages now, and while it has had more of the weird space stuff, the ending with another senses-shattering status quo upheaval just felt a little tedious.

Liam Sharp turned out to be the perfect artist for this comic - he gleefully embraced the weird, and could draw any of the craziness Morrison could serve up, but it's always been obvious which parts of the story Sharp isn't interested in, because it's always easy to spot the half-arsed effort he puts into that part of the page. He'll do some insanely detailed alien figure, and then rush out everything else on the page. And while that can be jarring, there is a similar focused feel to the writing, and it doesn't really bite.

I'm not sure The Invisibles is the best comic ever anymore, but I'm certain The Green Lantern isn't.
Posted by Bob Temuka at 7:00 PM