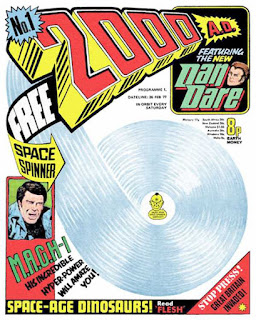 Like any fool with a comic book habit, I can't help checking out any pile of average looking comics when I see them in a second hand bookstore or thrift shop or anything like that. These piles are almost certainly going to full of worthless trash, usually in extremely dodgy condition, but sometimes - just sometimes - there is an absolute gem in there.

But I doubt that any great discovery will ever beat finding the very first issue of 2000ad #1, just sitting there on a shelf in the back room of a second hand shop in Christchurch. It's a shop that was one of many in that trade that vanished after the earthquakes that devastated that city earlier this decade, but while it still existed, they had had a copy of Prog One, just sitting there like it wasn't anything special.

Even better, the bookstore owner only wanted a buck for it, a deal that was so astonishingly good that I'm amazed I kept a poker face, and got the deal of a lifetime. If I was a decent human being, I would have insisted on giving them something closer to what it was actually worth, but I'm definitely not a decent human being, because I just shut the fuck up and gave them one coin for the original Galaxy's Greatest Comic.

Even without the space sinner, it's still the best score I've ever found at a secondhand score, and it's unlikely to ever be beaten. Unless there is a copy of Detective Comics #27 lurking among all the Beanos at the thrift store around the corner....
Posted by Bob Temuka at 5:08 PM