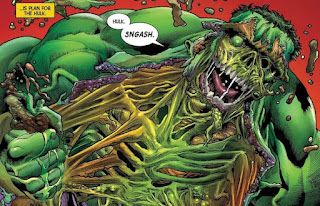 After coming into Al Ewing and Joe Bennett's Immortal Hulk long after the cool kids were all saying how good it was, the gross body horror and the existential dread generated by the green door weren't that surprising.

What was a bit surprising is that there were also a lot of dumb puns and wordplay. Sometimes it works - the use of the end titles as a storytelling device is superb - and sometimes it's just a bit clumsy and groan-inducing. Ewing's work has always had a wicked sense of humour in it, going back to his earliest Future Shocks in 2000ad, and while a lot of the talk about his successful Hulk comics has focused on the horror, there are still some laughs in there (or at least a few smirks).

Still, as a comic that has plundered all sorts of Hulk eras to create something genuinely new with the character, it shouldn't really be shocking that some parts of it read like Peter David never left. David was, after all, the Hulk writer for more than a decade, and his long stint was marked by pop culture references and some of the worst puns in modern comics.

The Hulk is now evolving into something disturbing and new, but he can't leap away from that kind of history.
Posted by Bob Temuka at 6:22 PM