The Batman's Grave: Have at it! 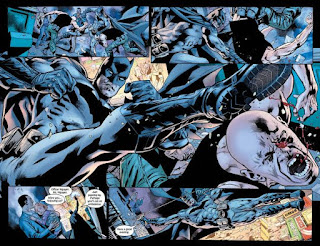 Warren Ellis is going hard on the detective aspect of Batman in first issues of the new comic he's doing with Bryan Hitch, which means it's something in the fine tradition of 'person stands around a simulation of a crime scene talking to themselves until they have a revelation'. That kind of detecting has become a little played out, but Ellis does that kind of monologing better than anybody else in mainstream comics, so it's not so bad.

But the best thing about this comic is Hitch's art. Hitch's work is usually noticeable for the huge cityscapes and mountains of rubble that invariably litter his artwork, but the Batman's Grave also gets stuck into some street-level fisticuffs, which has Batman just fucking going for it with the kicks and acrobatics.

Hitch's action staging on the hand-to-hand stuff has always a bit clumsy, but that's also been a huge part of its charm, it's never stiff or cordinated. He's good with the posing, but there is no time to pose when somebody is actively trying to kick your head in, and Hitch's Batman is always flailing around like he means it. We've all seen superhero fistfights a million times before, but Hitch's are still dynamic and strange enough to be interesting, because nothing beats Batman laying into some poor sucker who deserves it.
Posted by Bob Temuka at 7:00 PM