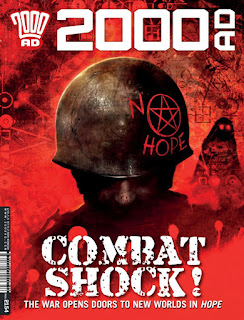 One of the best things about an anthology comic is that you get a mixture of different art styles, all in the same package. Tharg the Mighty has always been clear that the art in 2000ad is kept to a high standard, and it's maintained that standard, right through the years.

It's been a while since we saw anything substantial from legends like McMahon, Bolland or O'Neill, and some of the greatest artists have now passed on, but there are still some artists who have been drawing for 2000ad for decades now, and their work is as powerful as ever. Colin MacNeil and Chris Weston's work on Judge Dredd has been magnificent this year, with MacNeil becoming the go-to artist for the big Dredd stories after Ezquerra's death, while Weston's Judge Pin story captured every tiny detail of the pile of corpses that broke the SJS judge.

More recent arrivals Tiernen Trevallion and INJ Culbard have also been doing beautiful work on Absalom and Brink respectively, the first in glorious black and white, the latter with a colour palette that truly pops. Great art can also overcome a weak story - Thistlebone was a bit thin, but Simon Davis' work - which is far more fluid and less stiff than in years past - gave the story the deeply creepy pastoral horror vibe it needed.

But it's the overall presentation that still makes 200ad so visually stimulating. The standards are so high, and while there is always some artwork that misses the mark, no other comic brings so much excitement and beauty in its artwork every week. That's the real thrillpower lurking in these pages.
Posted by Bob Temuka at 7:42 PM