BPRD: They blew it all up 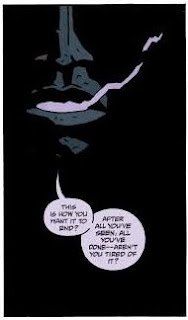 I'm still feeling a bit overwhelmed by the ending of Mike Mignola and friends' long-running BPRD comic. After years and years of warning of an awful apocalypse, they only went and bloody did it, didn't they? They blew it all up.

Comic books aren't short of an Armageddon or two, but this one was such a slow build, coming inexorably closer over a couple of decades, and a world that was vaguely similar to our own slowly broke down under the weight of extra-dimensional invasions and evil plans until it was truly hell on earth. And then things got really bad.

There were still some surprises there, at the end of all things - including the length of time the monsters actually rule the earth, and the amount of survivors who get away to start a new life in an underground utopia - but this was the only way things could ever end.

That doesn't actually make it any easier, and the cost of saving what they could and cleansing the world was so high that it's a pretty depressing ending to the comic, but you have to admire the commitment to stick to it. Prophecies don't mean anything if they're never fulfilled, and this end of the world was always coming.
Posted by Bob Temuka at 7:30 PM