Now I'm being chased by the Silver Surfer 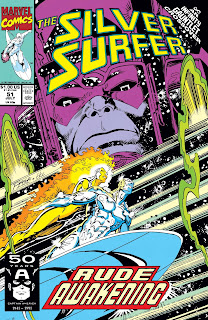 I used to be haunted by Kid Eternity. No matter how many times I sold off the issues I had of the actually-pretty-good Ann Nocenti/Sean Phillips comic from the 1990s, I somehow ended up with more. They would be given to me with others, or some part of a bulk purchase, and some issues I ended up owning three or four times.

Right now I think I've finally ditched the Kid Eternity, but now it's all about the Silver Surfer.

In particular, it's Silver Surfer #51, a fill-in issue put out while the sleek spaceman was chin-deep in the Infinity Gauntlet storyline, with the Surfer teaching Nova - the then-Herald of Galactus - an important lesson about life and time in the universe.

I owned that issue for years, but ditched it a long time ago, and then I've been given it twice since, and it came in a small collection of comics I wanted (to be honest, I was just after the What Ifs) and now I'm selling it off yet again. It'll be easy to get rid of, with the Infinity Gauntlet tie-in and a general love for all things 90s out there, it's an easy sell.

I don't know how this keeps happening, or why this particular issue keeps crashing back into my life over and over again. It's just a fairly average issue of a fairly average series, but I can't get away from it. This never seems to happen with comics that are actually worth something.
Posted by Bob Temuka at 5:05 PM