Doom Patrol: Not as weird as 30 years ago 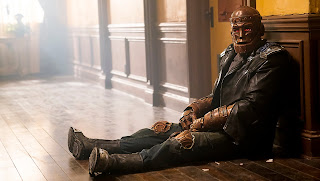 The new Doom Patrol TV series turned out to be fairly entertaining. There was some brilliant acting - particularly from Brendan Fraser, who has been knocking it out of the fucking park in multiple things recently - and there was an 'anything goes' attitude that is genuinely refreshing in this age of cookie-cutter superhero shenanigans.

There were also a few mis-steps - taking Timothy Dalton out of action for most of the first season was incredibly silly (when you've got the Daltonator, you should be using him as much as possible), and making Jane more of a one-note character was horribly ironic, considering her fractured psyche.

It also tried to capture the vein of deep weirdness that has been part of the comic books for most of its existence, with a particular debt to Grant Morrison and Richard Case's brilliantly bonkers run, while still offering a slick mainstream sheen. And sometimes it worked. And sometimes it didn't.

It's just a little disappointing that it doesn't go nearly as far as comic books published in the late 1980s. This was most obvious with the treatment of the Negative Man, who in Morrison's hands became a hermaphrodite creature that evolved into something new and strange, neither man or woman, and ultimately had sex with itself in a metaphysical mindfuck of an episode, while the new version was somebody that was gay in the 1950s. It just seemed safe and a little boring.

Some parts of the comic haven't aged that well at all, its treatment of Jane can seem jarring to 21st century eyes, but it was still well ahead of many of its contemporaries when it came to the weirdness of the new, and it seems that more mainstream entertainments are still catching up. (This probably shouldn't be such of a surprise, the big movies are still riffing on things the comics did 30-50 years ago, and they should catch up with actual cutting edge storytelling around 2050 or so.)

It's so much easier to do anything with words and pictures than any kind of major studio production, and maybe the rest of the world isn't ready for the full Rebis experience. But some of us were cool with it a long time ago.