No explanations in the Unexplained 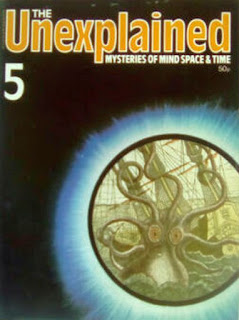 While one of my main goals in this short, sweet life is to get a complete set of 2000ad comics one day, there are still other ambitions that are just as sadly dorky.

One of them was that I always wanted a full set of the Unexplained magazines, ever since I was young. The magazine ran for just a few years in the 1980s, but was always my favourite source of esoteric ephemera, with articles about ghosts and Rennes-le-Château and Bigfoot and numerology and witches and all sorts of weird, mysterious nonsense. All this stuff was covered in an incredibly measured and sober tone, for the most part, giving it a real sense of seriousness.

And while so much of the things it covered has been proved to be bullshit in the decades since it was published, it's still one of the greatest magazines ever created.

I eventually picked up 3/4 of them at a junk shop 15 years ago, and it's taken me this long to fill out the gaps. I got the last ones from the legendary Book Barn in Chertsey recently, and read the whole series in one go for the first time. A lot of it got pretty repetitive and some of it was just too silly to bother with, but it was a delight to read all these articles in full.

I always hoped that some sort of secret of existence was hidden there in all that bold type and sharp diagrams, and while I didn't find it this time, I still can't shake the feeling that it's lurking in there somewhere. I'll have to go through it again to find out.
Posted by Bob Temuka at 6:22 PM