Everything but the Event 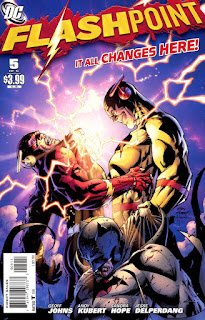 The big event comics put out by the big comics publishers usually come loaded with all sorts of crossovers and tie-ins, so that there might only be a few issues of the main event, but several dozen individual issues telling everything that's going around the periphery of the big story.

I never buy these things, because comics in this country cost a fucking tonne, and getting everything in some events would wipe out my retirement savings, but I do tend to read them all when they show up in the local library. Because libraries are amazing.

Unfortunately, it also means I often end up reading a bunch of the peripherals, and genuinely have no idea if I read the actual story that they orbit around. I must've read 80% of the Secret Wars crossovers that came out a couple of years back - and there was a metric fuck-tonne of them for that series - but I'm almost certain I never actually got around to the main series, (which might be why I still have a vague feeling that Jonathan Hickman's long-running Avengers storylines never really finished properly). I also don't think I read the Original Sins or Avengers v X-Men series, even though I read plenty of those tie-ins, and if I haven't got to the Flashpoint series that DC put out at the start of the decade, I'm unlikely to get to it now.

I do still get to a lot of them, even though most of them are so forgettable I couldn't tell you any of the details, and some do stick in the mind because they're so awful - I was expecting Heroes in Crisis to be at least readable, especially after thoroughly enjoying the Mr Miracle series by the same writer, but it was total pants.

Fortunately, it's easy to pick up the basics of what's going on in these things by reading some of the tie-ins. Some of the details can get lost, but they never seem to matter that much. Unfortunately, it also shows that these big event comics, which are apparently so integral to the idea line of comics, are easy to skip and unimportant, especially when it takes me a year or two to get to them, (if at all). In the end, they're pure non-events.
Posted by Bob Temuka at 6:26 PM