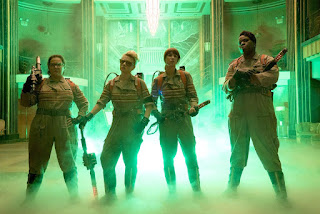 When the new Ghostbusters movie came out in 2016, it was impossible to find a review that didn't mention the online vitriol that greeted the movie's very existence. You couldn't talk about the merits of the thing without getting into the toxic culture that hated it for existing.

You certainly can't blame people for wanting to see the film just to stick it to all those jerks, but you just couldn't find criticism of it that wasn't coloured by all the bullshit, and the righteous push back against it. There was no indication that the movie was any good, or terrible, or something in-between, because it had all been contaminated by that extra context.

And it really was too much context, for a film that turned to to be pretty mediocre. It was another in a long line of film franchises that had nothing to say, and wasted an exceptional cast on silly one-liners, while over-indulging in CGI nonsense. But this all took a back seat to the loud braying of the ignorant, foolish and fearful mob, which somehow became more important than the film itself, because it was the #1 thing mentioned in every single bloody review.

The same thing has happened, to a lesser degree, with Knives Out, the new Rian Johnson film, with most of the reviews talking about how the director had to deal with the online reaction to the last Star Wars he did, as if that fucking mattered at all. Johnson leaned into it with one of the characters in his new film, who is a total troll, but almost certainly doesn't give a flying fuck about people who get upset at the notion of a female character who isn't subservient and compliant.

You can't ignore this shittery, because it's fucking everywhere, but it doesn't have to become the whole point, especially when they're drowning out people who have legitimate shit to say about the artistic merits of a piece of entertainment, and legitimate criticisms to make.

And especially when these fuckheads are a small minority. They might have delusions of grandeur, and are convinced that everybody is as tits-deep in the culture wars as they are, but I would argue that most people genuinely don't give a fuck what the trolls say, and the dorks with the loudest voices are the easiest to ignore.

It's giving them the power and attention they crave to constantly talk about them, as if they were actually important. They're not, just an unfortunate byproduct of an entertainment culture that seethes with entitlement and dork resentment. Never mind the nerds, what is it really like?
Posted by Bob Temuka at 6:23 PM