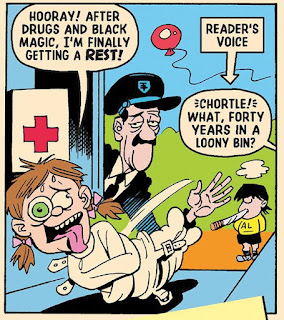 It's probably because I first came in to Alan Moore's comic work with his quick and witty DR and Quinch, but I have always thought as Moore as a comedic writer first and foremost.

His work always expanded out into seriousness - even in those early days he took on things like Skizz and Halo Jones with a straight face - but it was always the laffs that got me hooked on his stuff, with his mixing of sheer absurdity, clever concepts and killer one-liners enough to make me a fan for life.

I understand how those whose first exposure to his comics were Watchmen, or Swamp Thing, or From Hell don't feel this way, and I can also understand how they can even feel that his wittier comics are lesser works, (which is more a culture problem than a specific Moore problem - films comedies can say some pretty fucking profound things in between the gags, but still get shut out of major awards because they're not self-important enough). But I always thought his comics were some of the funniest I ever read.

This even leeched through to the many and various interviews, and I always found the big proclamations he made to be hugely tongue in cheek and self deprecating more than anything. Sure, he might be insulting everything and anything you believe in, but this was the guy who gave us 'Mind The Oranges, Marlon'.

His comics can be scary and tense, but always done with a wink, right up to the end. I always thought things like the League of Extraordinary comics were hilarious, and self-deprecating, and Moore certainly played it that way a lot of the time. There can be depth hidden in the jokes, and that doesn't mean those jokes can't be funny.
Posted by Bob Temuka at 5:36 PM