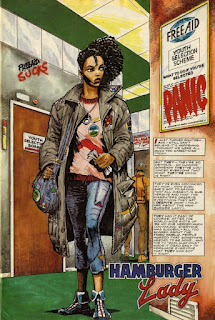 I didn't learn about the desperate issue of third world debt and the way it cripples the economies of many people around the globe from a newspaper or TV report, I learned all about it from a comic book.

When 2000ad announced in the late eighties that it was trying to get a chunk of the mature readers market with its new Crisis comic, the Third World War strip by Pat Mills and Carlos Ezquerra was a major part of it, and the advertisements made it look like a typical testosterone fest - one image of the strip's adverts featured meathead Gary kicking in a door, and wouldn't have looked out of place in Judge Dredd.

But it soon turned out to be something very different from the usual 2000ad fare - Mills was always a proud social justice advocate, and Third World War saw him get stuck into the incredibly damaging policies of the world's great capitalist powers, and how they took a giant shit over the rest of the world.

It was still science fiction, extrapolating out the worst case scenario, but it was all based on Mills' typically thorough research. A timeline at the start of each story would show how the world got to the state it was in, and seamlessly extrapolated out into Mills' fiction.

Mills' anger at the way these poor people were being treated was right there on the page, and it wasn't hard to share it, and soon had the feeling that somebody should probably be fucking doing something about it. Some people have, and Bob Geldof gave the world another reminder about these crippling debt obligations with his Live8 concerts show, but it still hasn't gone away.

Third World War eventually went far beyond this look at South America, and brought the war back to the homefront. It eventually petered out with the eco-terrorism thrills of Finn in the regular 2000ad, but those first few issues of Crisis taught me more about the dangers of hyper-capitalism than a dozen textbooks.
Posted by Bob Temuka at 5:39 PM