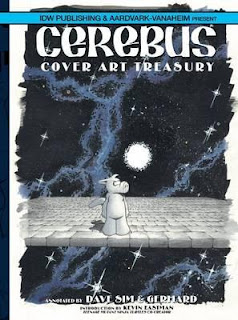 The Cerebus Cover Art Treasury is a gorgeous collection of the fine art and design work that went into the covers for the long-running self-published series, with notes from creators Dave Sim and Gerhard. It's just a shame that Dave couldn't help being so fuckin' Dave about it.

Gerhard's notes are an insight into his techniques and the gritty details of producing a new cover every month. Sim's notes feature a lot of the same sort of details, but also lapse into the kind of self-important bullshit that destroyed the comic's legacy.

Sim is still moaning about the same shit, and it's as tedious as ever. There are complaints about being the victim of the great internet lynch mob of 1995 (when fuck-all people were actually on the internet), and implying how his theories about women being voids who suck the life and creative force from males was all just a joke anyway, one that people will only get in future generations. In fact, Sim seems convinced that he has been proven right in the years since, expressing amazement that only one person who gave him shit about it when it was published has since apologised for their reaction.

There's a lot of the sort of tiring crap that is a massive turn-off in today's commentary culture - including bullshit complaining about SJWs ruining the cultural discourse, as if you can't discuss anything without shitting on an oppressed group, and a dig towards the end at critics who are bribed to give movies good reviews. (This last one is intensely trivial, but is also indicative of an absolute reluctance in many folk to admit that other people might like something that they don't, which pisses me off personally to an extraordinary degree, because journalists are always getting accused of pay-offs that never fucking happen, and because it's just incredibly harmful to the whole concept of art.)

There is some worth in the book - Sim and Gerhard were killer artists and designers, right up to the end, and there is a lot of good details and insights into how they achieved some of the incredible covers they produced, and a lot of the raw artwork is just lovely to look at.

But while I should have expected the usual crap, it's still a pain in the arse to stumble across more of it. If Dave is never going to admit that he's full of shit now, he never will.
Posted by Bob Temuka at 5:41 PM