Fun and games with Chris Ware 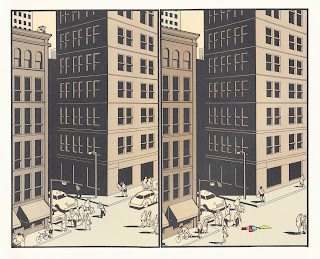 There's a new collection of a Chris Ware comic out there now, which means another round of the usual reviews, all saying the same damn thing, over and over again. Did you know that Ware's comics are meticulously crafted, but ultimately miserable? Nobody has ever pointed that out before.

But shit, while most of his characters are wrestling with the vast and uncaring nature of the world, there's also always loads of good jokes, and the bit in Jimmy Corrigan where Superman takes a dive off a building is one of my all-time favourite gags in any comic ever.
Posted by Bob Temuka at 6:48 PM