Breaking Bad: Not enough self loathing 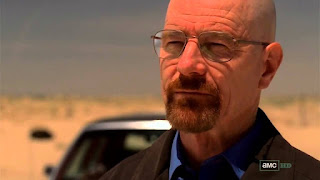 Breaking Bad has been topping a lot of recent lists for the best TV of the decade, and while I wouldn't agree with that (Twin Peaks, all the way), a recent rewatch confirmed that it's still fucking good, full of incredible tension and sun-baked madness.

But Walt is a terrible person, and despite a monumental performance from Bryan Cranston, he's still an arrogant shitheel who gets a lot of people killed because of his stupid pride.

Apart from the kicker at the end of the fly episode, when he says how it's all contaminated, Walt never really confronts his own awfulness - convincing himself that he's doing it all for her family - until the final episode, when he finally tells Skylar that he did it for himself. He did it because he was really good at it and he made him feel alive, and it's one of the strongest moments in the series, and the real climax of the whole thing (blasting away the neo-Nazis can't compare to that kind of emotional release).

Modern TV is full of difficult men like Walt, but he was never really self-aware enough to really transcend his own story. He was never a Don Draper - the secret of Mad Men is that no matter how much you hate Don Draper for the terrible things he does, it's nothing compared to how much he loathes himself - Walt was just another arrogant middle-aged white guy.

His ability to get out of deadly dilemmas through lateral thinking and Cranston's portrayal of his various desperation made him a terrific character, but that lack of self loathing prevented him from being a truly great one.
Posted by Bob Temuka at 7:22 PM