Cracking on with the New Adventures 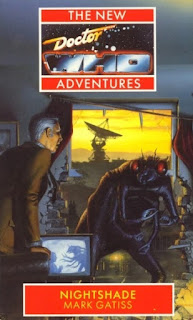 I've spent a considerable amount of 2019 reading Doctor Who novels from the 1990s. Even though I've been slightly obsessed with these books since the days they were first published, it's still taken me more than 20 years to actually get hold of the entire New Adventures series, so I've decided to go through them in order, two decades after they were anywhere close to relevant.

It's taking a while, with all the other reading I plow through on a regular basis, but I'm 10 books into the series, and they're a fascinating glimpse into the world of Doctor Who during the time is was taken off air.

Heavily influenced by final script editor Andrew Cartmel's masterplan for a more mysterious, moody Doctor, (noticeably when Cartmel himself is writing some of the books), the early New Adventures are full of things that would become cliches over the next few decades of Doctor Who, and an overwhelming sense of ambition, trying to make every story big and important and impossible, while very rarely actually getting there. (Not that I'm bothered by a bit of failed ambition, Doctor Who always works best when it's reaching for the stars, and feels old and creaky when it plays it safe, no matter what the results are.)

A fair few of the writers have faded into obscurity, but others like Cornell and Gatiss have moved onwards and upwards, and their earliest efforts are so eager to please, and can have a slightly irritating habit of beefing up the body counts, but I'm looking forward for the 60-odd novels I've still got to go.

Still, I think I've totally reached my limit of passages where a character runs their hands through their hair (or over their bald head). That was already a painful cliche, long before this particular stretch  of space and time.
Posted by Bob Temuka at 7:39 PM