I don't complain at all 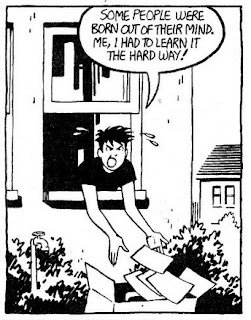 I don't complain when I just want to check something in an early Bacchus comic, and I have to put aside at least eight banana boxes that are fully packed, just to get at it.

I don't moan when I'm trying to get through onto a flight, and hoping like hell they're not going to check the weight of the backpack I'm carrying, because it looks small, but there are at least 12kgs of Doctor Who magazines and Art Speigleman hardbacks in there. (Although my mate Nik may be regretting the mega-sized Fantastic Four book he has to haul from Northern California to West Auckland.)

I never regret these overseas purchases, because I might not get back there again ever, and I didn't complain when I almost fucking died carrying a hundred issues of 2000ad from a Sydney train station to my sister's house in 2003.

I never, ever consider getting an e-reader of any kind, 'because it's easier'.

I don't protest when I have to rearrange the whole thing. It's like that bit in High Fidelity when the loser dude sorts out his record collection after a break-up. I'm that loser dude, but it's comics.

Because all that effort, all that moving about, all those overflowing cupboards, all those aches and pains, all that dropping that shit on my toes....