Vertigo: At the end of the road 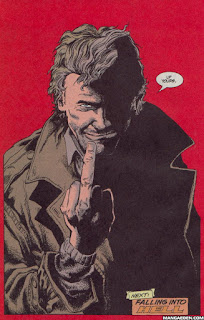 As uncool as it always sounds, Vertigo comics really did change everything for me. I was 17 when they launched and absolute primed for stylish, pretentious and fucking weird comics, and Vertigo certainly provided all of that, and more.

I was getting at least one Vertigo comic every month for the first 10 years of the imprint, although I've only bought the odd one-shot for years now. They've still been putting out a lot of quality comics, but few of them really appeal that much to me, probably because I haven't been 17 in a long, long time now.

There have been many attempts to give the line a push, and I always hoped more of their comics would catch on, although they never really did. The entire imprint never really got over its Sandman fetish, and while it had plenty of big hits like Preacher and 100 Bullets and Fables and Y The Last Man to keep things ticking over, Sandman always hung over it and there have been countless attempts to recapture that magic, including one in the past year.

Now there is a lot of chatter that Vertigo may soon be shut down by its corporate overlords, who only see the bottom line, and can't understand why they don't own so many of the properties they publish. It would be sad to see it go, not just because of my own personal history down Vertigo way, but for all those other stylish, pretentious and fucking weird 17-year-olds, who might need stories that make them feel less alone in this cold, cruel world. It always worked for me.