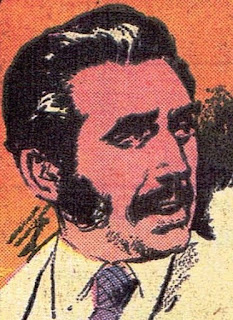 Most comic readers have favourite writers and artists, and follow them from title to title, because they know seeing a certain creator involved is a guarantee of certain quality.

Most people don't follow inkers as much. There has always some fine embellishers in the industry - including Wally Wood, who brought polish; Terry Austin, who bought shine; and Kyle Baker, who made everybody look like Kyle Baker (which a very good thing).

But in the 1990s there was another inker whose name was always worth following, and that was the great Dick Giordano. It wasn't because of his actual artwork, which was always super solid and reliable, but because the man had definite taste, and if he thought a comic was worth inking, it was worth reading.

Dick G was a company man to the end, and an editor who had a profound impact on mainstream comics. But he always kept one hand on his brush, and he would frequently pop up as the inker on various Batman projects, or on James Robin's Starman book, or inking up Steve Yeowell's work on The Invisibles.

None of these assignments had much in common, other than they were published by DC, but seeing Giornado's name meant it was usually worthwhile, because he thought it was worthwhile. He passed away in 2010, but I'll always trust his taste.
Posted by Bob Temuka at 12:30 PM