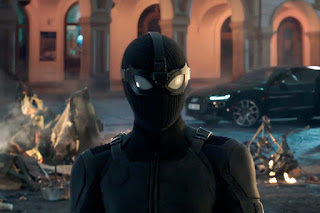 I was at an independent comic artist convention last weekend, and it was fucking amazing - I walked around like a slack-jawed idiot, awed by the quality of the artwork being produced in this country. There were dozens of artists and the standard was sky high, there were so many beautiful mini-comics and prints and posters and clothing and figurines. And most of it was of absolutely no interest to me, with way too many pastel unicorns and wide-eyed elves on magical quests.

Which is bloody fantastic, as far as I'm concerned. As a forty-something year old white dude, there is too much art that feels like it is being made just for me, and all that stuff I'm not interested in brings  some real diversity and colour to the comics medium and industry, which is badly needed and greatly appreciated. Bring it all on, and the stuff the kids like absolutely should be completely baffling to me, because it's theirs, not mine.

That's how I feel with modern Spider-Man comics. I haven't bought a regular issue of Spider-Man since the 20th century, and while I still roughly follow his adventures through the collections at the local library, and watch the movies, we swung our separate way a long time ago.

That's okay. The best Spider-Man is the Spider-Man who existed when you are 9-years-old, and that's a long time ago for me. While a character like Batman is eternal, I got off the tired wheel of Spidey's endless 'power and responsibility' trip a long time ago, and leave him for the kids who still adore his wisecracks and the way he hurtles through the New York sky.

Spider-Man was there for me when I needed him, but he there is for somebody else now. I just got to get out of the way and let everybody else have their fun.
Posted by Bob Temuka at 1:03 PM