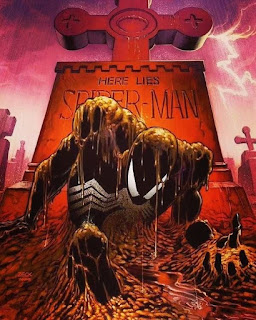 There was a moment there, just before Todd McFarlane came in and took things in wriggly new directions, when the Spider-Man comics got a bit weird and creepy and smelly.

With DC getting a lot of mileage by piling complexity onto Batman, Marvel made a few stabs at the idea in the late 1980s, with a couple of moody graphic novels, and storylines in the main comic book that were a radical departure from the straightforward superheroics of the past decade.

It wasn't just the Kraven's Last Hunt storyline, which was dripping in dank atmosphere and existential tension, it was things like the slow drugged nightmare of Ann Nocenti's Life In The Mad Dog Ward, with ethereal art by Cindy Martin.

These comics ran in the regular Amazing Spider-Man, and were probably a bit too upsetting for the traditional Spidey fan. McFarlane's art was just a couple of months away, and would be more to the kids' liking.

You can still do just about any kind of story with Spider-Man, and many have over the years. There have been comics like Tangled Webs, which gave creators such as Rucka, Risso, Cooke, Bone, McKeever and Mahfood free reign. Kaare Andrews made good ol' Pete Parker a sour cancer-machine in one comic, while Bagge took Peter all the way down Objectivism Street.

But these are always special projects now, usually outside the main continuity. For a while there, the future of the character was really looking at how fucking creepy a man with spider powers could be, but he always goes back to swinging in the light.
Posted by Bob Temuka at 3:20 PM