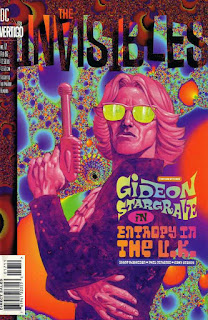 My Grandad died 35 years ago, but I still have three pieces of chunky wood that he crafted into something for me. One of them is a big, blue toy car that I always thought of as a gangster's car, another is a lockable two-litre silver box that has always been home to my action figures.

And the third is a brown wooden box that has a faded patch on the front where there used to be a sticker that came free with the British Crisis comic book (it said 'STICK IT'). It also used to have a lid, but that vanished over the years too.

It's also the perfect size for two piles of American comic books. It's about 10cm deep, so I can get about 100 in there, and I've always put my very favourite comics in there.

For the past two decades, that's mainly been a lot of Grant Morrison comics, especially The Invisibles. I need to keep them safe, because I spent too much time reading them on the beach, drunk as fuck, and they're beaten to hell by saltwater and sentimentality. They've lived in Grandad's box since the 90s.

I still love the Morrison, like all good people, but maybe it's time for some re-evaluation as to what my favourite comics are, and which deserve a place in that box of awesome. Flex Mentallo is probably staying in there, but I haven't cracked open those Invisibles for a while. Maybe it's time to work out what's really important.

All of Grandad's boxes and toys are still sturdy and in excellent shape. They could use a bit of paint, but they're solid as hell. I hope that he would like that I still put my favourite things inside them.
Posted by Bob Temuka at 1:41 PM